Parenting is not an automatic, knee-jerk response.  NO ONE just knows it.  It’s not inherited nor pre-printed in your brain in the parents book of know-how!

Chances are that you’re parenting exactly as your parents did – or exactly the opposite!!

The world has changed IMMENSELY in the last 5 years, let alone 10 or 15 – when your teen was born.

And by today, your kids and their world and their chances to do incredible things HAVE CHANGED!!

So your plan of action must change also!!!!

– which presupposes that you PAUSE, and think

– don’t make it a knee-jerk reaction.

All human behavior is successful [purposeful].  [Many people will disagree. They’re wrong]

There’s some gain, or self-image preservation that a teen “accomplishes” by their actions.

Example: If they don’t know how to do something and don’t want to admit it, avoiding it preserves their shaky self-image.

Many years ago, I observed gifted kids who were academically strong and therefore had never been challenged in school/ classes.  When they finally were, typically in college, they were emotionally defenseless – they had no strategy no mental resource available!  It had never been developed!  They simply didn’t know what to do – and their self-image was “under attack!”

So if your teen becomes defensive or belligerent or avoids doing something needed or requested or explained, this is a great time to [pause, think], then follow our ASK, DON’T TELL strategy.

Teens are TIRED of being TOLD.  So by shifting to an ASKING, information-seeking mode, not sermonizing or “teaching” – you’ll get further AND strengthen your relationship!

BTW – Discovery learning – leading them to their own revelations – is THE most powerful means of learning!

SO – was there information here you can use?     When?

Got your information-seeking, non-accusatory questions?  Prior thought and preparation is what makes anyone a champion!! 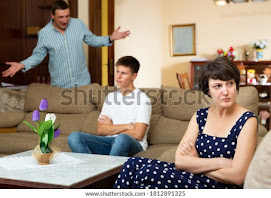 Posted by launch-your-life at 2:21 PM